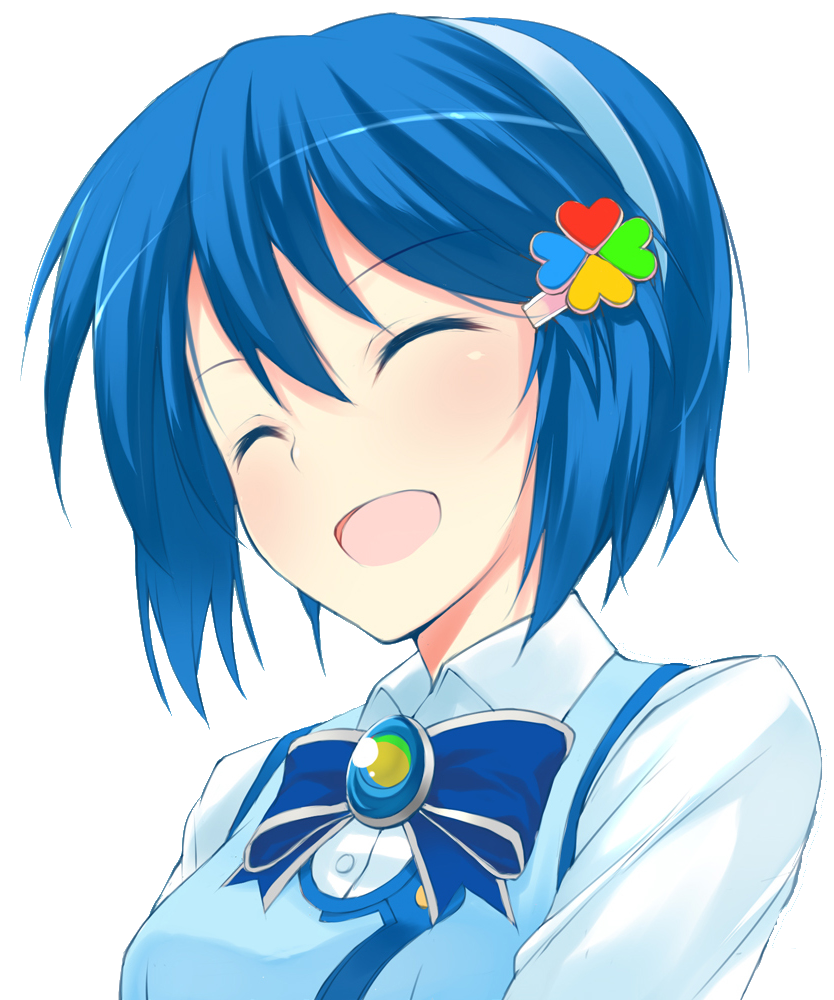 Nanami, of the Madobe family (窓辺ななみ), is the first in a generation gap between the 2chan OS-tans and the new generation OS-tans.

She's thus usually listed alongside the other "official" OS-tans.

In Nanami's case, however, she is not actually owned by Microsoft.


Among the OS-tans, Nanami is a strong contender for most recognizable, certainly so among the new generation OS-tans.

Part of this is due to the success of her marketing, and another part is due to Windows 7 having a strong legacy.

However cute as she is though, as seen in a remark in the comment section of this Japanator article, Travis Touchdown does not approve.


She has her own Twitter, although don't expect it to be used much anymore.


Note that なな, nana, is one of the readings for the 七 kanji for the number 7.

The year is 2009, and Microsoft is set to release their next version of Windows, after the controversial Windows Vista.

In what I suppose was partially caused by Vista's poor reputation, a certain body began to plan a way to increase the sales of Windows 7.

I'm not yet sure just how far the extent of the involvement of the various parties go, partially due to language barriers, unarchived info, and also just because I haven't researched enough, but copyright info attributes the creation of Nanami to a company known as "Techno Alliance Corp", who as far as I can tell was a distributor of Microsoft products in Japan.

In any case, the artist Wakaba was involved as the character designer, creating Nanami, who was featured on promotional material for the DSP edition of Windows 7. 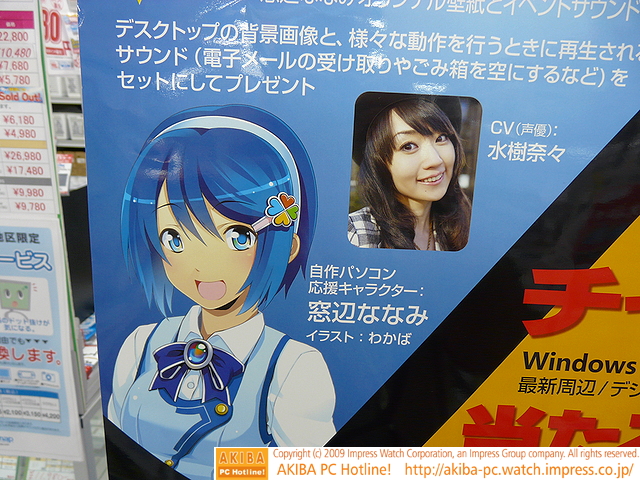 7,777 copies of the Windows 7 DSP edition sold at the launch came with a special Nanami theme for the OS, including backgrounds and voicelines performed by Nana Mizuki, who would go on to voice her in her future appearances, as well, a choice which I assume was intentional due to the name.

You can find a dump of this theme on the internet archive.

I'm not sure if this specific dump of the theme is compatible with modern versions of Windows, though I know that a download somewhere online works with Windows 11, because I found said theme at some point, where it currently resides on my Windows 11 laptop.


Nanami is neither of 2chan nor Microsoft in origin, but instead from a single artist, although the degree to which Wakaba had in the marketing ordeal is still unknown.

I suppose that this means, unfortunately, that she will not receive Gates-sama's blessings when reaching the afterlife.

A year later, with the release of Windows 7 Ultimate edition, Nanami returned to the spotlight with both a commercial, and a song produced under her name, the CD of which was sold to 77,777 of the preregistrees.

From this commercial, we get to see some of Nanami's character traits.

She's got the usual genki personality, shown by how enthusastic she gets while showing how to put together a PC (note: similar Nanami-themed shells, like the one shown in the video, do exist).

At the same time, she's also a clutz, since she fails to propperly insert screws into the shell, apparently not the first time either, since she remarks "I forgot to do it again" (Bakabakashii, Nanami).

She's also easily entertained, even by all of those filler features which have become staples in modern Windows editions, such as the Windows Live features.

The song used for the soundtrack of this commercial is Seven Color Generator, her character song.

Somewhat to my surprise, for I was expecting to have to do it myself, a certain Rizuchan has already translated the lyrics, which I shall copy here (if you happen to be reading this, and don't like me copying the translations, please get in contact with me. I can consider an alternative, if you wish).

Dynamics that move you into spring, I wonder how many times I've thought
That someday, such words should surely be best not found in a manual
What color was the story drawn on the window?
If I can't stop it, TRY AGAIN, I'll want to change it

I can even invent something to make you see miracles SEVEN DAYS
Even tears are seeds of a rainbow
When I have fun in seven colors, even in the middle of a head wind, look, I'm smiling right now!

Lying spread out, with my belly-button showing, in my room, I probably just don't have enough self-confidence
I've thought it over so much, I wonder if there's anything but screws left in my head
It's a puzzle theory for obtaining an image
A challenge to create a shape piece by piece

I'm getting closer to the dream of being able to see the future, STEP BY STEP
Even if I mess up, it's another step
Even each day gone by that has dissolved into sky-blue shines, BRAND NEW DAY
Starting from here

I'll believe that even little things can move my heart, and run on

I can even invent something to make you see miracles SEVEN DAYS
Even tears are seeds of a rainbow
When I have fun in seven colors, even in the middle of a head wind, look, I'm smiling right now! 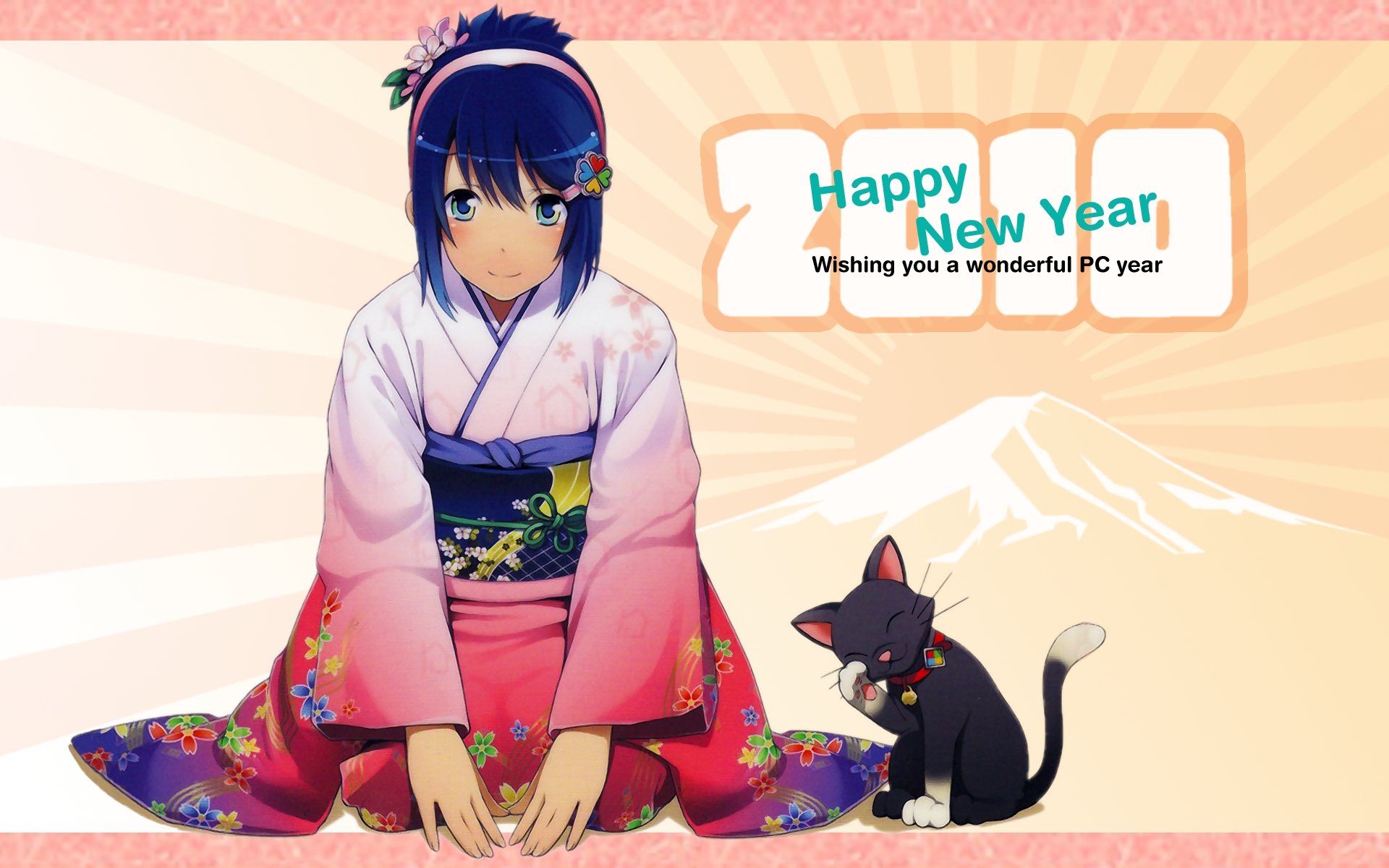 As time passed since her antecedants, Nanami is bound by more recent artstyles, when compared to the amateurish styles of the former 2chan.

Thus, she gives off a very different aura when compared to the previous OS-tans.

This is most obvious in her eyes, which have a certain iredescences, which has a very certain modernity to it.

Her most defining accessory is her hairclip, of course, with all four colours of the windows logo.

She even has her own official 3D model.

It's difficult to find the download for the model alone, though I do happen to have it on my hardrive; it comes in both .FBX and .pmd format.

Early artwork has her with different hair colours and styles.

She also has a black cat, whose name I cannot seem to find at all(?) (the cats keep coming back...). 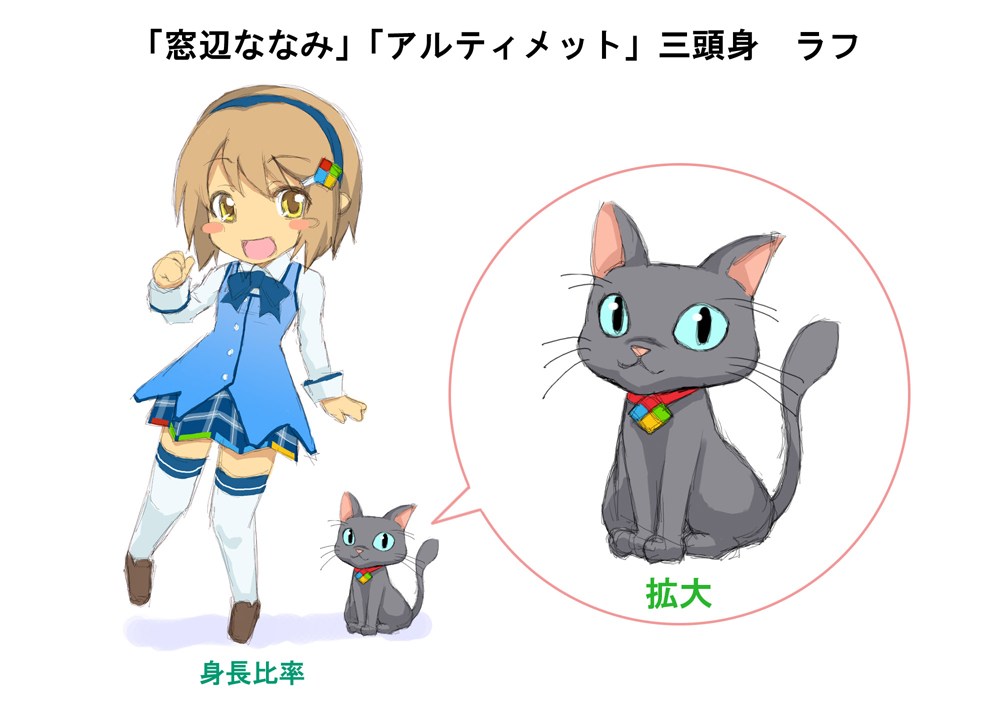 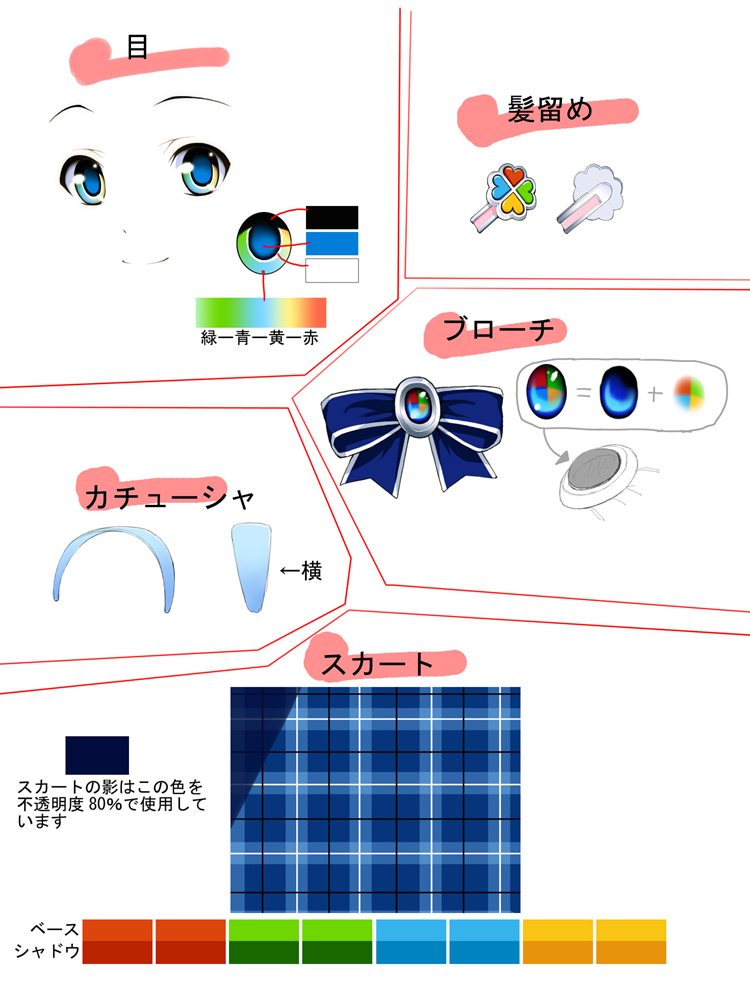 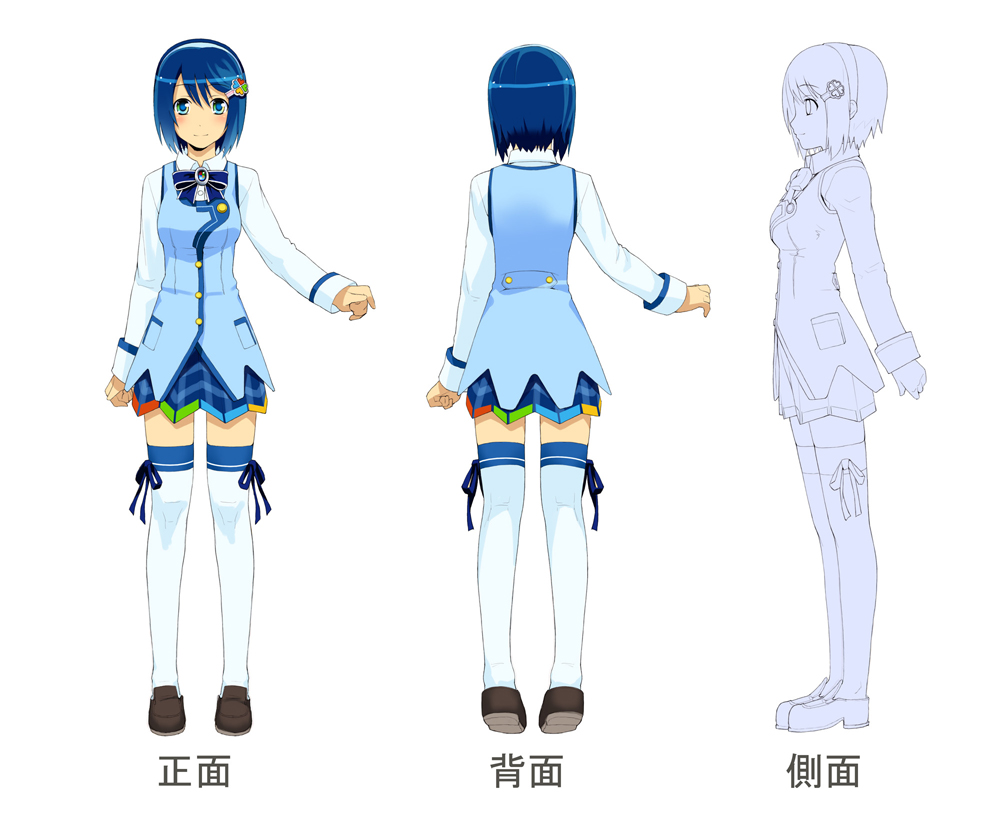 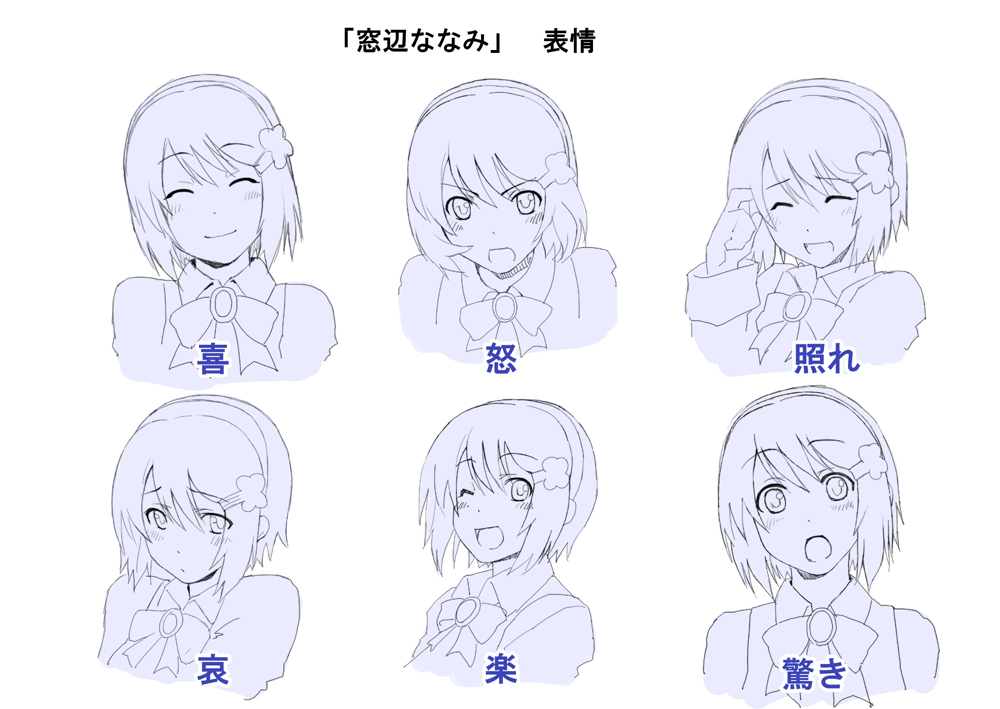