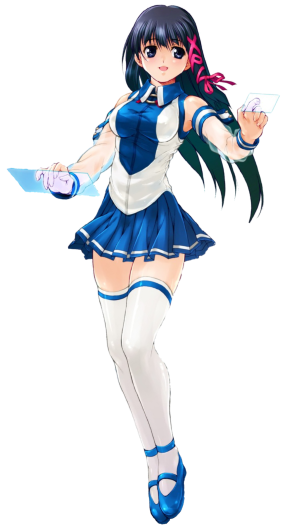 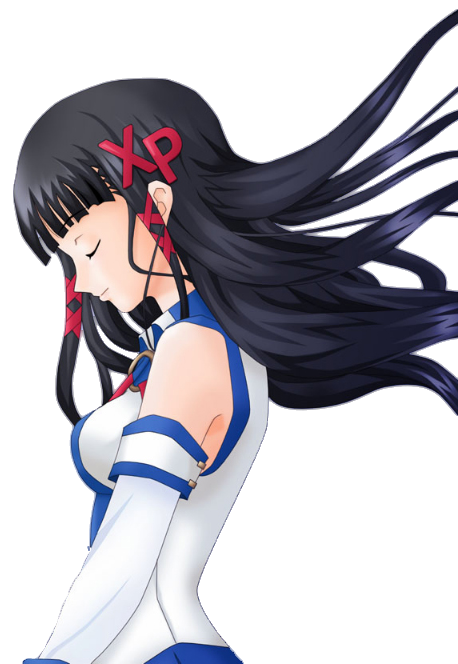 The OS-tan for Windows XP.

When the OS-tan movement first started, XP was the most recent Microsoft operating System.

The keys 'x' and 'p' on Japanese keyboards are also the keys for 'さ' (sa) and 'せ' (se) respectively, so she is often nicknamed させこ (Saseko).

Around the time of its release, XP made many changes to structure and UI of Windows, and, along with other changes, caused it to have quite a few critics upon its release, especially on Futaba.

The main gripes people had were the amount of unnessecary programs and features, often called 'bloatware', and the overhauled UI and menus were at first too flashy and over-designed for some people. 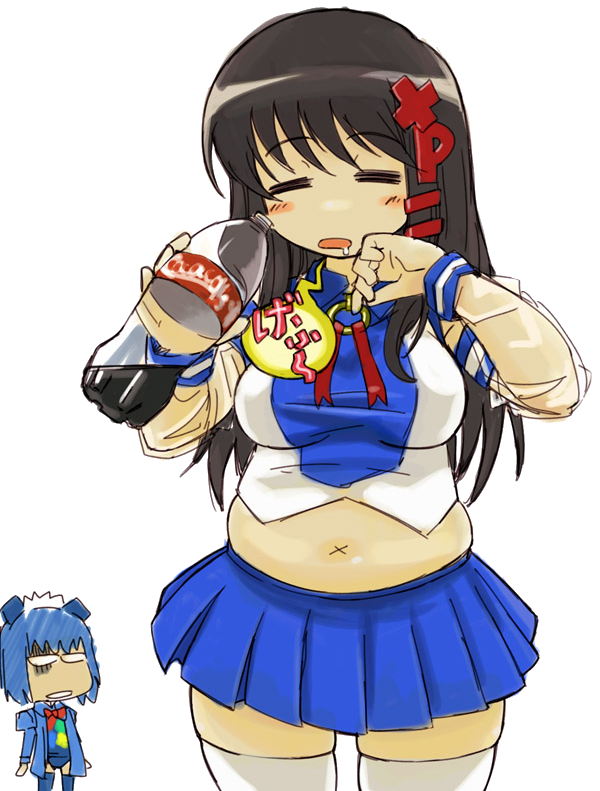 For these reasons, XP-tan was first known for promiscuity and having a shallow personality.

Furthermore, due to her tendancy to 'eat' RAM more than previous versions of Windows, XP was known as a 'gluttonous' system.

To reflect this, her other main trait is eating, usually rice. 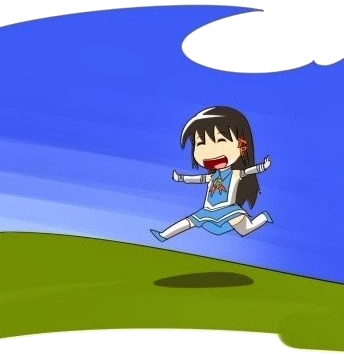 This characterization was due to how XP was first perceived, but it did not remain that way forever.

Not only due to the operating system's popularity, but also because it has since been compared to more recent, less respected operating systems, XP became a strong contender for the title of 'Microsoft's best OS'.

Since people didn't maintain the stigma held for her when XP first launched, Saseko isn't seen as having the negative personality traits she was first created with.

Still, she maintains her design which reflected her original promiscuous personality, and she is shown having kept her tendancy to eat a lot. 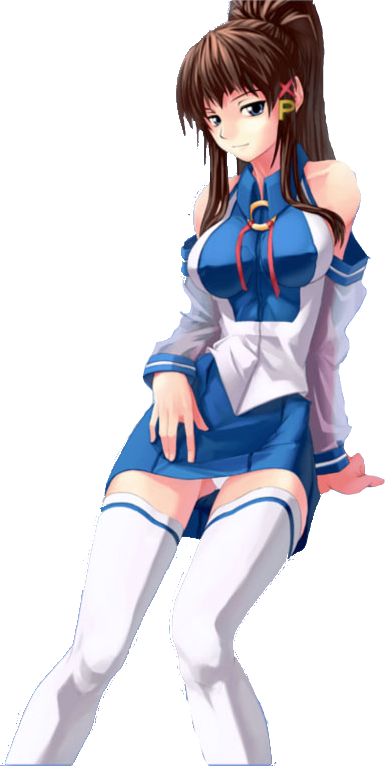 Her design usually has her with dark hair, varying between brown, black, or dark blue, with either one or two "XP" hair clips.

She usually wears her hair down, although there are quite a few works with it in a ponytail.

As a part of her original interperetation, she usually wears skimpy clothes, either short or tight in nature.

She often wears clothes made with transparent or see-through material, most often her sleeves around her arms (that, or she is very, very damp).

Some art has her wearing clothes styled after a seifuku, as well.

The most common element between all of these outfits is the short skirt, which contrasts the longer skirts or coat-tails of the maid-styled OS-tans.

Another common element, and I mean really common, is a golden ring around her neck, with two red ribbons hanging off of it.

It's in almost every single drawing of her, no matter which artist drew it, or whatever alternate outfit she's wearing.

I have absolutely no clue what it's called or what it's supposed to represent.


Aside from the clothes, the 'RAM-requirements-are-equal-to-breast-size' belief about OS-tan designs is likely in reference to Saseko in particular, since she is usually drawn weller-endowed that the other OS-tans.

She often fits the role of fanservice character, in both design and role, in most webcomics, especially older ones.

Pantsu gags are rather prominent (see: notes on the short skirt).

XP-tan aligns with the role of OS-tans, which are servants who perform the roles of the OS they represent, even though her design does not match the maid-style of the other OS-tans.

To accomplish this, she is often seen showing a closer attachment to the user, such as that of a housewife, I suppose.

In her original depiction, this was due to her desire for attention being used as a negative trait.

Now, though, this close relationship is considered to be a positive trait. 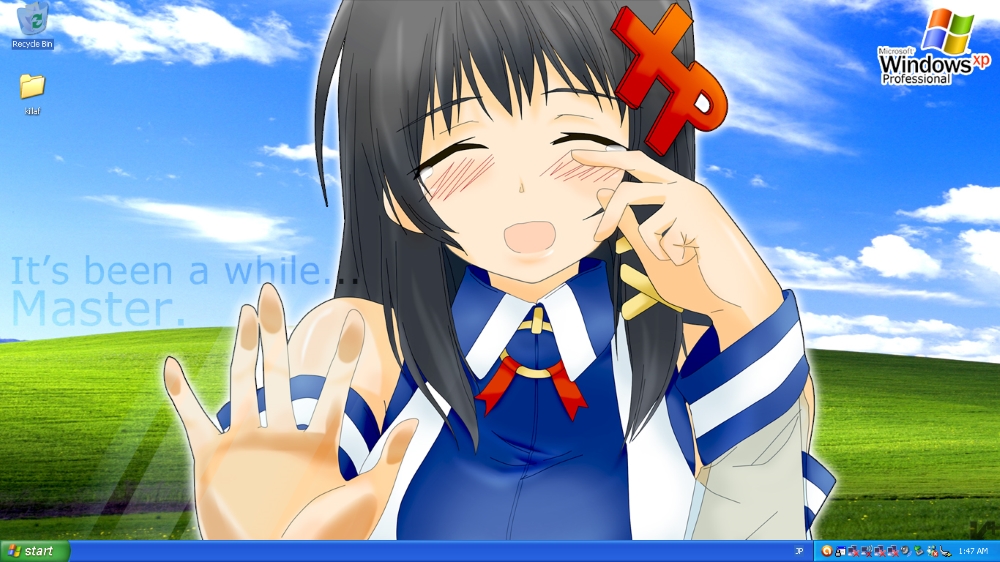 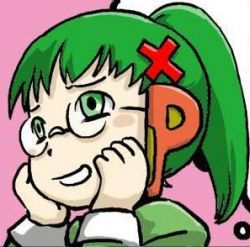 A "popular" alternate rendition of XP-tan is for the home edition of Windows XP, suggesting that Saseko is the professional version of XP.

I say "popular", but I haven't been able to find much art of her.

Her name is Homeko, and the main aspect of her design is her green ponytail.

She supposed shows up as a fujo lot in fanfiction, although I haven't found much of that yet, nor do I intend to read much of it, either.


I suppose her existance implies that all versions of XP have their own respective tan.

I wonder, then, who the OS-tan for Windows XP Gangster Edition might be...

I usually try include a section about weapons at some point in these articles...
XP-tan, however, is not exactly depicted in combat often.
Here's a picture of her with guns, at least: 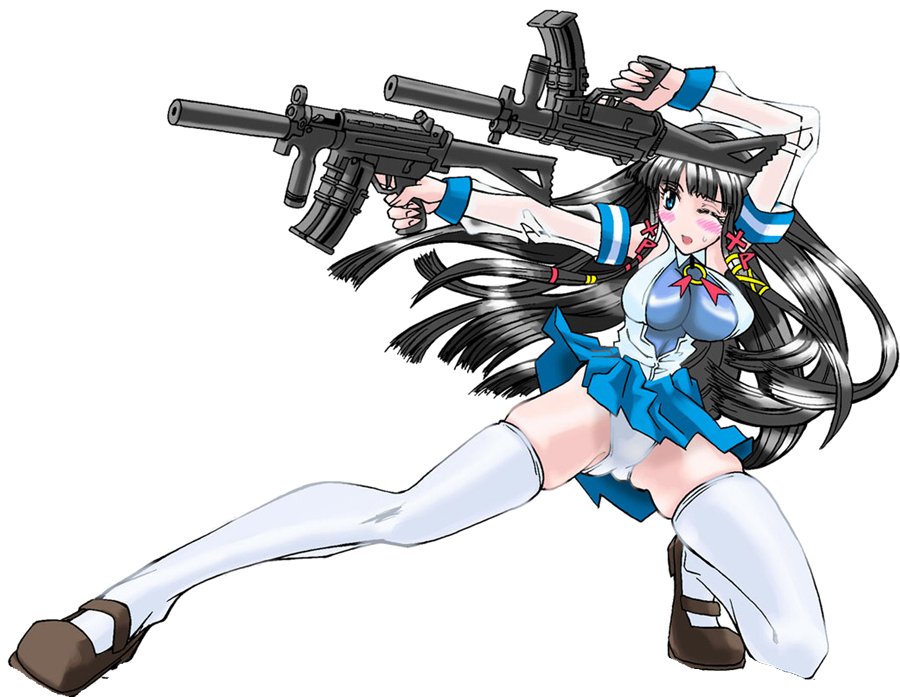